There is nothing new in Condoleezza Rice’s new Middle East. It is, writes Azmi Bishara, the same old wolf dressed up.

It was on 21 September 2004 that President Bush first used the term the Greater Middle East. He was speaking to the UN about America’s campaign to spread freedom and democracy and, in the same breath, to fight terrorism, a campaign that, he believed, would transform Afghanistan and Iraq into models of democracy to be emulated by other countries in the region. 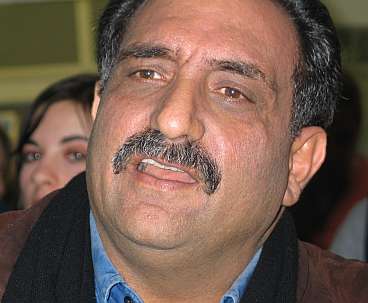 On 22 July 2006, US Secretary of State Condoleezza Rice refused to call for a ceasefire in Lebanon, thereby confirming that Israel is fighting an American war in Lebanon and will go on fighting it until the war accomplishes Washington’s political aims. Washington has set the goals and will determine when it is time to stop, yet like a doctor comforting a patient Rice counsels the victim to endure the pains which are, she says, the birth pangs of a new Middle East; another admission that this is America’s war. And as Israeli ground forces prepared to land in Lebanon even some Israeli ministers were beginning to ask whether Israel was actually fighting an American war.

But wait a moment. Before joining the flock of analysts and commentators who take every sentence uttered by an American official and tailor it to fit their own theories and justify their own garrulous existence, could it not just be that Rice just had to come up with some kind of excuse for her government’s criminal refusal to insist on a ceasefire? Could she not have been seeking to suggest no more than that the Middle East will be a “better” place after this savage war? Had she not done so, she would have been left to defend an act of unmitigated sadism the purpose of which is death and destruction for death and destruction’s sake.

There are no theories. No matter how we look at it, there is nothing new, nothing to supersede the old Israeli dream of the “New Middle East” authored long ago by Shimon Peres who, during the Oslo era, came to believe “moderate” Arabs would normalise their relations with Israel to the extent that they would have no compunction cooperating with it against other Arabs it labeled “extremist”.

There is a new mood in the neo conservative administration in Washington. They have abandoned attempts to export democracy by gunboat, though only because such attempts could not withstand the Arab people’s horror of the Iraqi model. As happened during the Cold War, Washington has reconciled itself to allying with non- democratic states they classify as “moderate” — which is to say regimes that follow American dictates — as long as the alliance serves US interests. And unlike previous administrations, they have shed any discomfort at openly and directly cooperating with Israel in targeting the Arabs, including toppling one Arab regime in order to bring in another.

It was not that long ago that Bush Senior asked Israel to hold its horses after Iraqi scud missiles struck and to leave things to the American-led coalition, because the addition of an Israeli cook would at the time have spoiled the broth. What a long way Bush Junior has come since then. After the US’s plans for Lebanon fell through he had Israel start the war against the Syrian-Iranian axis, which is allied with the Palestinian and Lebanese resistance movements. Washington, meanwhile, has vowed to cover Israel internationally, not only by preventing the passage of a ceasefire resolution but also by billing Israel’s brutal aggression as a drive to implement UN Security Council Resolution 1559.

Helping to make all of this possible is the fact that Arab regimes have been paralysed since the fall of Iraq. No longer can they say one thing and do another, spouting radical anti-Israeli and pro- resistance rhetoric while secretly begging the US to produce a settlement of any sort. They bargained away their official positions on Arab causes in exchange for Washington turning a blind eye to their domestic human rights abuses.

Between the Greater Middle East and the ignominious, blood-drenched return to the New Middle East, the cities of Iraq and Lebanon crumble, corpses are strewn along the sides of the roads and the groans of the wounded, screams of grieving mothers and wails of orphaned children rend the air. Such are the birth pangs of the New Middle East, as explained calmly and dispassionately by a nasty lady whose pathologically sedate, hysterically cool voice contains nothing of the ear-shattering reverberations of smart bombs and dumb bombs, the bewildered screams of the living who have had their hearts ripped out and the silence of the dead beneath the rubble. The doctor of bombardment and displacement, the minister of death and destruction, the envoy of desolation and grief speaks, without a flicker of emotion on her face and lips that barely move.

Of course, what’s really going on behind all this talk about a new Middle East is a new joint US-Israeli adventure, the aim of which is to deliver a debilitating blow to the resistance, as both a domestic and a regional force and movement, and as an obstacle to the America’s bid for complete hegemony over Lebanon. America and its allies were gritting their teeth as they saw a socio-political movement coalesce and stand in the way of Washington’s desire to turn its embassy in Beirut into a latter-day High Commissioner’s residence. Their frustration grew as the situation in Iraq reached a point where an incident is considered newsworthy only if more than 30 people are killed, and even then it merits only a brief mention, well after the other headlines.

International envoys are now scrambling to come to Lebanon. European visits, which of course preceded Arab ones, are intended to suggest that the Europeans are doing something other than America’s bidding. Of course some European politicians, with electoral campaigns in mind, took advantage of the opportunity to have their pictures taken while helping to get their fellow citizens out of the country. Others came to commiserate with the Lebanese, firstly, against the resistance and, secondly, against the Israeli bombardment — the former being the cause and the latter the effect, in their opinion.

European behaviour towards the Arabs is so depressing that it now reminds me of the observations made by left- wing political theorists at the end of World War II that Hiroshima, the Holocaust, Stalin’s Gulags and the annihilation of the American Indians are no more than the flip side of enlightenment civilisation. That flipside is being acted out in Lebanon through delicate diplomatic proprieties, performed so as to avoid saying anything meaningful. The racism that underlies preconceptions about Muslims gives further cause for depression. If Israel says that Hizbullah targets civilians and threatens Israeli cities, the Europeans nod and agree that this is sufficient ground for war, regardless of the fact that, throughout its recent history, Hizbullah has refrained from targeting civilians even in retaliation for Israel’s targeting of civilians in Lebanon. It makes no difference that Hamas had refrained from suicide attacks against civilians over the past year. Nor does it do Hizbullah or Hamas any good that they are as different as night and day from an organisation like Al-Qaeda. At the end of the day they will be thrown into the same terrorist basket, bracketed together in the statement of a European diplomat issued with consummate calm and self- possession. Then the camera will cut to a reporter, live from Beirut, reiterating Israeli lies and fabrications against the backdrop of bombed out buildings, seemingly unaware that he is justifying Israeli crimes, reduced, in his terminology, to the phrase disproportionate force. But contrary to the myth Israel does target civilians. It has set its sights on the murder and displacement of an entire denominational segment of Lebanese society because it believes that this segment forms Hizbullah’s base. It targeted other segments of Lebanese society in order to scare them away from Hizbullah. It unleashes terror against civilians in order to achieve specific political ends.

But racist Western culture refuses to see this, which is why its diplomatic and media corps are of one mind, which is that Israel has to destroy Hizbullah, the only worry being that the “surgery” needed to remove that “cancer” might kill the patient, Lebanon.

All the scuttling back and forth of diplomats and envoys aims to create an international and Arab consensus against the resistance and so ensure that it is removed from Lebanon. While they’re at it, Western diplomats will help organise a regional blockade of Syria, if it refuses to cooperate, and of Iran. Not surprisingly, Damascus and Tehran have not been invited to attend the international conference in Rome to discuss the situation in Lebanon. This is not because these two countries don’t have interests at stake in Lebanon, but because the conference is another front in the US-Israeli offensive. The fruits of war, after all, are gathered politically. One of the fruits Washington wants is for Syria to end its alliance with Iran, although why Syria should believe any promises the US may make in this regard is anyone’s guess. Washington has made it abundantly clear what it has in store for the regime in Damascus.

The many visits are also intended to demonstrate America’s embrace of the Lebanese government — an embrace that is really a bear hug. The aim of this embrace is to propel the Lebanese government towards an agreement with the US over a ceasefire, in accordance with which it will have to prove that it is mature enough to take matters back into its own hands. Instead of a Palestinian Authority being transformed into a sovereign state, a sovereign state is being transformed into an American-run Lebanese authority.

I believe we will soon be seeing a redrawing of boundaries in the neighbourhood of the Shebaa Farms, the purpose of which is to pull the carpet from beneath Hizbullah. Ideas are being floated to bring in an international force, preferably a NATO one, even though everyone knows that the resistance will regard it as an occupying force and behave accordingly. But the US has no problem with Lebanon erupting into civil strife — “creative chaos” in the words of the very woman whose mention of a new Middle East precipitated the prolific scratchings of so many pens.

In the midst of this, the release of the two Israeli soldiers has been all but forgotten, as we knew it would because that was never the purpose of this assault. That is only a sideshow, a tangential incident, in the pursuit of the Israeli version of a comprehensive solution. So comprehensive is this solution that it does not address the problems of Lebanon, nor the Palestinian cause nor the occupied Syrian Golan Heights, but only the elimination of the resistance by striking sovereign states and overturning existing governments. After that, let the flood come, or creative chaos, or a new Middle East — call it what you like, it’s all the same to the pragmatists who are currently preoccupied with executing and rationalising a campaign of death and destruction.