For those who read English, this is an interesting article, and interview, about and with Tariq Ramadan, in Al Ahram, the Egyptian weekly that can be read in English online. The paper usually has interesting political comments, for instance by Azmi Bishara, and regular articles and news on Palestine, by journalists like Graham Usher, Jonathan Cook and Khaled Amayreh. Al Ahram can be viewed as a critical and progressive viewpoint from the Arab world. Edward Said used to write for it regularly. Recommended. 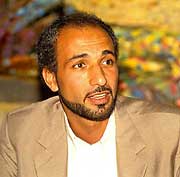 “Who is Tariq Ramadan?” a British journalist asked me recently, reflecting the debate currently raging in certain European media circles over the young Muslim intellectual. But this question also reflected the general sense of confusion, often verging on scepticism, as to what to make of Ramadan and the intellectual project he has been developing for almost two decades now.

To some he is a brilliant young philosopher who brings together what is best in both Islam and the West. He is a bridge builder between two civilisations, a vocal activist calling for universal justice, and one of the shaping forces of our time. His detractors, however, accuse him of double-talk, delivering a gentle message in English and French, and a radical one in Arabic; of projecting a liberal face in order to conceal his true “Islamist agenda”. Worse still, some have even labelled him “the Trojan horse of Jihad in Europe”. As such, he is now a central figure in any debate around the future of Islam on the continent.