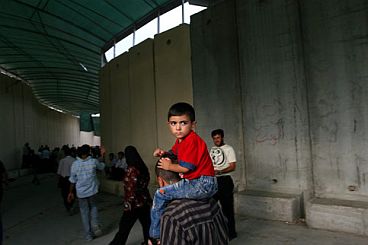 So much has happened since we left Gaza and in such a short period of time. If it was mentally exhausting being there, it is even more overwhelming being away and processing it all.

I was in Gaza during the months of May and part of June shooting a film (ok, two films) with my friend and colleague — one about the tunnels along Rafah’s border, another about the remarkable story of Fida Qishta and her attempt to establish Rafah’s only true recreation center amidst everything that is going on there. It was exhausting, but rewarding, work. We were traveling to Rafah from Gaza City almost every day, for the entire day, in the midst of internal clashes that gripped the city where we live.

We had planned to leave Gaza around the beginning of June, with tickets booked out of Cairo 7 June. My parents were to come along with us for a visit. As is often the case in Gaza, things don’t always go according to plan.

Rafah was open erratically during the month of May, and closed entirely the week prior to our departure. We received word that the crossing would open around midnight of 6 June. Wonderful, we thought — at least we could make our flight, if only barely.

We spent 14 grueling hours at the crossing, along with thousands of other Palestinians, desperate to either leave or enter Gaza. Busload after busload, entire families were clinging to the ceilings, crushed inside, or piled on top of the luggage in the back. Some fainted. Others erupted in hysterics. Everyone had a reason to. There were mothers separated from their spouses, students needing to return to college, the ill, the elderly. And those with nothing particularly remarkable to justify their reason for traveling — it was their right, after all.

In the early hours, there was a chill, and we warmed up with sugary mint tea and bitter coffee. But by noon, the midday sun was fierce over our heads with no place to take shade. And so we waited. And we waited. And every time a bus would heave forward a few inches, our spirits would lift a tiny bit; everyone would cheer.

At one point, hundreds of anxious passengers, each following the advice passed down along the Rafah Crossing grapevine from those who had successfully made the journey across, began to pour across the fence into the Palestinian terminal, throwing their bags over first then climbing across themselves — “It’s the only way you’ll get through today … in a place where there is no order or sense or logic to why and how this damn place opens, you have to find your own way across.” I thought of the tunnels we had been filming, how one tunnel lord told us some people pay him $5000 just to get into Gaza via a tunnel when the crossing is closed.

The European observers of the crossing “suspended” their operations as a result of the “chaos” for several hours. They eventually returned, but by the time the crossing closed at 2:30pm, we were left stranded on the Palestinian side of the crossing, with the Egyptian side only meters ahead.

It difficult to put into terms what it means when a territory of 1.4 million people’s only passage to the outside world is for closed for the majority of the time, and open for only a few meaningless, infuriatingly slow hours when it is open at all.

We returned to our home in Gaza City exhausted, demoralized, dehumanized. We received word the crossing would open again the next day. We debated whether or not to attempt to cross after the day’s events. We had already missed our flights out of Cairo, and attempting to explain Rafah to distant airline customer service representatives was never a simple task.

A few hours later, we were on the road again. We clung to the hope that at the very least, the crossing might be less crowded the next day. We were sorely mistaken. There was perhaps double the amount of people we saw the day before. This time, the packed buses extended way beyond the crossing. We waited till the afternoon. It was only then we began to hear through the taxi drivers that some skirmish had broken out between Fateh and Hamas in Rafah, that the Fateh-led preventative security building there was surrounded. But we made nothing of it.

Never could we have imagined what would happen in subsequent days.

We waited until the later afternoon. The prospect of our crossing became more distant with each passing minute, and each bus that didn’t pass. We felt like we were going backwards, not moving forwards. Demoralized, my father decided he wanted to go back to Gaza City — “let’s just wait until next week, maybe it will be less crowded. We already missed our flight.” “No, wait, let me try one more thing,” I suggested, remembering the advice of one passenger the days before — “you have to find your own way across.”

I had refused to give in to rule of the jungle the day before. But today, I realized if I didn’t do something quick, we would never get out.

We talked to a taxi driver we had met the day before — a sly, strong-headed type you don’t want to get into an argument with, from the Abu Eid family in Rafah. He owned a beat up Peugot that had seen better days. He mentioned he knew a way around the crossing, a path reserved for vehicles belonging to the security forces. Desperate, I asked if there was any chance he could take us through that way.

There were no guarantees we would be allowed through, but he could try. And so in a last ditch effort, he drove us to a security gate. We were met with staunch refusals, and “are you crazy — what will they do to us if we let you through!” We pleaded with them, told them how we had waited 14 hours the day before. But still no pity.

Then, an empty bus on its way back from the crossing drove through. Our driver negotiated with him. He too refused, until he heard our story, saw my young son Yousuf, and finally said, “What the heck, come on, I’ll see what I can do.” And so we crossed, albeit backwards. We drove into the Palestinian side of the crossing, passports already stamped from the day before. An officer saw us, remembered us from the previous day, and let us through hurriedly. As we were getting ready to depart, a European monitor greeted me. “Hello, how was your day?” How was my day? Is this guy for real?

“Difficult. The crossing is very difficult.”

“Oh but at least, it’s better than yesterday, at least people are crossing.” It was then I realized these monitors were completely detached from the reality beyond the few square meters they, well, monitored in the sanitary confines of the terminal, and back again, one kilometer, to their headquarters in Kerem Shalom.

And so by evening, we were in Cairo. And slowly, within the coming days, news began to filter through about what was happening in the Gaza we had only just left behind, the Gaza whose gates were closed shut just after we had left it, and whose gates remain shut to over 6,000 people, 19 of whom have died so far.

So maybe you can begin to understand what I mean by mentally exhausting, having left a place where I desperately long to be, even in the worst of circumstances, and yet where I would have been stuck against my will, away from my husband Yassine.

My parents are with me. It is a mixed blessing. My grandmother passed away last week, and my mother couldn’t be there to grieve with her family. Some Palestinians with foreign passports have been allowed through Erez into Gaza, but for those with Palestinian Authority passports (which we carry, and which Abbas has decreed null and void unless issued from his new dominion in the West Bank) there is no alternative other than Rafah. I’ve had so many thoughts about what’s happening. But it’s all been so overwhelming, so unbelievable; that there can be such collusion, both regional and global, so much bullshit, with so little protest.

And of course the icing on the cake is the recent Haaretz report that Palestinian sources said PA Chairman Mahmoud Abbas asked Israel (and Egypt) to keep the crossing closed to prevent the movement of people from Egypt to the Gaza Strip for fear that “thousands of people without supervision” could enter Gaza and strengthen Hamas. Something, not surprisingly, that Saeb Erekat and company deny.

Rafah Crossing has been closed for six weeks now. There are food supply shortages. Electricity shortages. Yet the internal situation remains calm, say family and friends.

When, I wonder, will the global conscience finally awake?

17 gedachten over “The closed gates to Gaza”