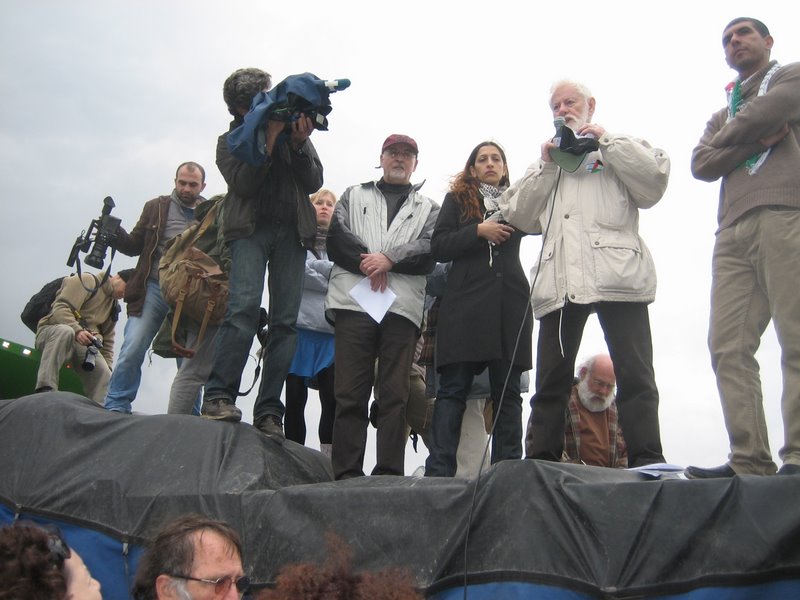 Adam Keller’s report of the aid convoy to Gaza

“There is a problem” said the elderly woman who phoned urgently on the day before we set out. “The food which I and my husband bought for the Gaza Convoy is too much to be put into one box. But if we divide it in two, the Palestinian families who get each box will feel that Israelis are very niggardly. And the shops are already closed, we can’t buy more. What shall we do?”

This Tel Aviv couple was among the very many people, in Israel as all over the world, touched last week by the plight of Gaza and trying to do something about it – preparing personal aid packages, distributing leaflets at street corners and on university campuses, working feverishly deep into the night to take care of numerous logistical hitches in the preparations for the convoy, sending a stream of donations from all over the world, picketing Israeli embassies and convoys with signs reading “Let the Convoy Pass!”.

After many months in which it had festered, virtually unnoticed by the world at large (though full reports were available on the net for any who cared to look), the Siege of Gaza has suddenly burst into the headlines and the TV screens. A new situation was created by the decision of Defence Minister Barak to make an already terrible situation completely intolerable by altogether closing down the border passes, Gaza’s fragile lifeline. In desperation the Palestinians have taken the step which is often urged on them, not always in good faith – i.e. to undertake mass non-violent action a la Mahatma Gandhi…