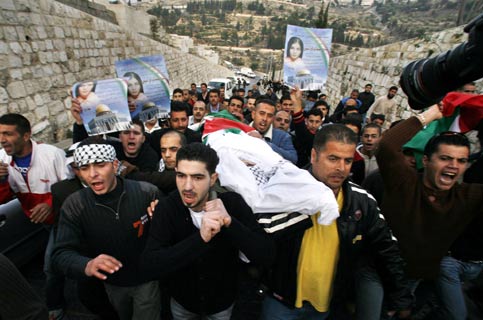 The Deaths of Children

The front page of New York Times this week featured a story on the Israeli-Lebanese exchange of prisoners. The headline tells us that Israeli wounds have been reopened; the accompanying pictures depict a startlingly child-like Lebanese assassin in police custody and two adorable Israeli children, the victims of a cross-border raid; the opening two paragraphs are devoted to the pain of Israeli family tragedies, nearly thirty years ago and now.

But there is something missing from this emotional story of endangered children and their families- namely the context in which these tragedies occur. There is no mention here of the Israeli occupation of Palestine, the source of the struggle. We are not shown that far more Palestinian than Israeli children live in daily danger: lacking medical treatment in Gaza, on the verge of malnutrition, caught up in brutality at check points or simply walking home from school. We learn little of what every Israeli might easily know from consulting the B’Tselem web site (B’Tselem is dedicated to documenting and contesting human rights violations in the Occupied Terrirtories). Their data show, for example, that in the seven years between September, 2000 and August, 2007, the Israeli defense forces killed 4233 Palestinians and Israeli civilians killed an additional 41. During that same period, which includes the suicide bombings of the second Intifada, 320 Israeli soldiers and 471 Israeli civilians were killed by Palestinians. Even more to the point for people who wish to base their political arguments on the lives of children: during those same years, 857 Palestinian children were killed by Israelis and 119 Israeli children were killed by Palestinians. 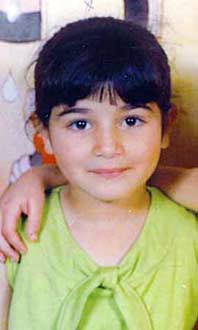 Perhaps those 857 dead Palestinian children are best represented by the life and death of 9 year old Abir Aramin. On January 16, 2007, Abir Aramin was walking home from school when the Israeli Border Police, a branch of the Israeli army, swept through the town, as they had on many other days right around the time of school closing. Children fled before their jeeps. Abir took shelter against a store and was shot in the back of the head at close range. She died soon thereafter at Hadassah Hospital. She was the child of Bassam and Salwa Aramin. Her father, a member of Fateh, had been labeled a terrorist and served 9 years in an Israeli jail for his attempt to throw a grenade at an Israeli jeep. Upon emerging from prison, he became one of the Palestinian founders of Combatants for Peace and continues to work with his Israeli counterparts to bring an end to the occupation, even after Abir’s death. No Israeli soldier has been charged in the case.

An account of Abir’s death was written by Nurit Elhanan-Peled , an Israeli mother whose daughter Smadar was killed by a Palestinian suicide bomber . Nurit Elhanan-Peled is one of the founders of Parents Circle-Family Forum, a grassroots organization for bereaved Palestinians and Israelis. She offers these observations:

“I sit with her mother Salwa and try to say, ‘We are all victims of occupation.’ As I say it, I know that her hell is more terrible than mine. My daughter’s murderer had the decency to kill himself … The soldier who killed Abir is probably drinking beer, playing backgammon with his mates and going to discotheques at night. Abir is in a grave.”

The New York Times is a paper of record and prides itself on publishing “all the news that’s fit to print.” Apparently, contextualizing analysis such as this is not quite fit to print.

Eve Spangler is an Associate Professor of Sociology at Boston College and a member of several grass roots groups working to promote justice for Palestinians.