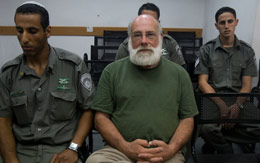 Jeff Halper at an Israeli court in Ashkelon. (Oren Ziv/ActiveStills) 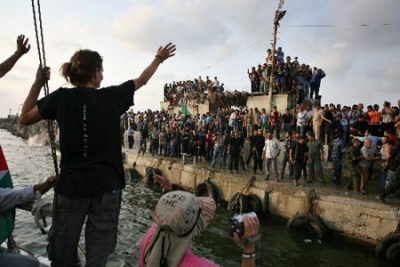 Jeff Halper in Gaza: “We are the oppressors”
Rami Almeghari, The Electronic Intifada, 1 September 2008

In an interview with The Electronic Intifada, Jeff Halper, the Israeli-American director of the Israeli Committee Against House Demolitions, discussed the ongoing Israeli siege on the Gaza Strip and the Free Gaza Movement (FGM). Halper was one of 46 members to take part in FGM’s action to challenge Israel 14-month siege on Gaza.

Halper discussed all of this with EI correspondent Rami Almeghari in the occupied Gaza Strip, just hours before he reentered Israel through the Erez crossing, where he was detained and placed in custody by the Israeli army.

The Electronic Intifada: Now that you are in Gaza, would you please comment on the Israeli siege and the international embargo on the Gaza Strip?

Jeff Halper: The international community, through the UN, imposed economic sanctions on Gaza, which is an illegal act in international law, showing the poverty and the failure of the international system. That’s why if you [want] justice, if you have to end the siege, end the occupation, end sanctions, the people have to do it, because the governments will not do it and the UN won’t do it because it is controlled by governments.

Therefore, it’s the people who have to rise up, and that’s what we did; 46 people came here from 17 countries and we broke the siege. We came here to Gaza by boat and it shows the power of people to beat armies, but at the same time we shouldn’t have [had to do] this because the governments should have done it.

JH: I am an Israeli here in Gaza, we as Israelis have to start taking responsibilities for what we are doing. For the Israelis there is no occupation, so everything is terrorism from their point of view. What I am trying to say is: no, we have an occupation, we have siege, we have sanctions, we have closure and therefore, we are the strong party, we are the oppressors, the Palestinians aren’t occupying Tel Aviv. Therefore, it’s our responsibility to end the occupation and to bring an end to the conflict.

EI: How do you view the Israeli apartheid regime in Palestine?

JH: Well, that’s the problem. Israel is trying to finesse an apartheid regime under the guise of a two-state solution and that’s what we are trying to warn against. Israel wants two states, it wants a Palestinian state because it is responsible for four million Palestinians [in the Occupied Palestinian Territories] who it doesn’t want responsibility for, and it wants a Jewish state. But in the same time, it wants the lands, it wants the settlements and it wants to control and so on. So the trick for Israel is how do we sell a bantustan like in South Africa, a Palestinian bantustan in an apartheid situation under the guise of two states. That’s what we have to be very vigilant about and don’t let them succeed.

EI: Israel has always claimed its right to a Jewish state, demanding that the Palestinians recognize its Jewish identity. What is your opinion?

JH: I think it is impossible to have a Jewish state. I think we have to start talking about Israel and not a Jewish state. Either there is a two-state solution, a state of Israel for all its citizens — including Palestinian Israelis — and a real Palestinian state, or a one-state solution in which we all live together in one democratic country. Those are the options. But the option of apartheid that Israel is pushing has to be unacceptable to all of us. But why is Israel pushing up a Jewish state? Because that’s the logic of a state that is based on the privilege of one particular group.

Once Jews or Europeans in South Africa or a particular group says, this is our country exclusively, we have more rights than other people, that’s what leads you to apartheid. And so the only way out of Apartheid is to reconcieve this whole country as one country that belongs to all of us.

EI: How do you foresee the future of an Palestinian-Israeli peace process with the US playing a leading role in such a process?

JH: Well, the so-called Annapolis process is just a fraud … [US Secretary of State] Condoleezza Rice is in Jerusalem today, I think it’s her 17th or 18th visit here … it’s ridiculous from my point of view, it’s not a genuine peace process, there is no genuine negotiations … because the Annapolis process is an attempt to try to impose this apartheid regime.

EI: Finally, do you expect that more breaking of the siege actions, like the boats on which you came, will take place after you arrived successfully to Gaza?

JH: It has to, that’s the whole point, it can’t be one-time thing. The only way that we can break the siege is the constant movements all the time of boats and ships. Palestinians have to invite people to come and there has to be an international mobilization. We have to get a movement here. Otherwise, it just goes back to what it was, so that’s important follow up that has to be done.

Rami Almeghari is contributor to The Electronic Intifada, IMEMC.org and Free Speech Radio News. Rami is also a former senior English translator at and editor-in-chief of the international press center of the Gaza-based Palestinian Information Service. He can be contacted at rami_almeghari A T hotmail D O T com.