My heart has been broken so many times, writes Alice Walker somewhere, that it feels like an open suitcase with the wind blowing through it… But maybe, she muses, hearts are made to be broken, and what is required of us is simply a steadfast acknowledgment: Open up and let the wind blow through; that’s what hearts are for.

I am an American-Israeli Jewish woman of 60 living now in an Arab town in Israel and working for Jewish-Palestinian-Arab-Israeli reconciliation. I have two friends in Gaza and I will tell you how we came to be acquainted.

The first step was simply refusing to be enemies. There are thousands of Palestinians and Jews like me, in the Middle East and worldwide, who refuse to be enemies. We rarely make the headlines in your local paper, but we are here. One day we will prevail – not over anyone, but with everyone together. We are creating a new reality together and the paradigm, sooner or later, will shift decisively. Meantime, people needlessly bleed and suffer and die and mourn; the scenarios are endless but the outcomes are identical: death, injury, pain. What distinguishes Gazan suffering at the moment is that the noncombatants have nowhere to run to. The borders are sealed. The bombs fall. The world watches.

In 2006, one of my several informally adopted children, business consultant and “business for peace” activist Sam Bahour of Al Bireh, Palestine, started an Arabic-English-Arabic translation service, AIM Word Factory. A key goal was to provide employment for underemployed Gazan translators. To have the honor of being one of the first customers and helping that great idea launch, I sent him, for translation into Arabic, an anti-war story I wrote many years ago called “Dudu in Heaven,”[1] about an Israeli woman who loses her brother in the 1967 Six-Day War. The translator in Gaza was a young professional named Maha M., and the shared literary mission led to some email exchanges, all conducted via Sam. “Maha says the story is too sad,” Sam reported at one point. “She likes it very much, but she says you ought to write a happier one next time.”

Not long ago, I discovered that Maha’s nephew Mohammed, 14, is the boy whom Sam has been helping for some years now in a very personal struggle with a rare inherited immune disease, CGD. Sam donates and helps raise money from private donors for Mo’s treatment and medication and has been successful in assisting Maha to get the necessary “permits” from Israel to enable her to accompany Mo for his treatment. Mo became a patient at the Edmond and Lily Safra Children’s Hospital, Sheba Medical Center, Tel Hashomer, an excellent Israeli facility near Tel Aviv. (“Everyone on the medical staff will go straight to heaven someday,” says Sam.) Mo and Maha recently spent two and a half months at the hospital and the nearby Bet Hayeled (“Children’s House”), the hostel for young patients and their families on the hospital grounds; their “permits” do not permit them to leave the campus and their travel documents are deposited with the guard at the hospital entrance. This is the reality of Israel and Palestine, so far; the change we are struggling to midwife is not yet. In November, Mo underwent a bone marrow transplant at Tel Hashomer.

I only discovered that our Gaza-based translator of “Dudu in Heaven” was in Israel toward the end of their stay, early in December when Sam mentioned it by chance. I got organized fairly quickly and went to visit them, accompanied by Abdalla, the 22-year-old son of my landlord upstairs. I figured Mo would enjoy an Arabic-speaking visitor and Abdalla was happy to oblige. We invested in an enormous basket of chocolates – “the absolutely correct gift to bring to a Palestinian child in the hospital,” according to Abdalla – chocolate being one of those things that evidently transcend cultures. Also for the young patient, Abdalla’s mom Faryal contributed some never-worn boy’s jeans and sweatshirts that her sister Shadya in New Jersey sent recently for Abdalla’s kid brother, who is too big to wear them. For Maha, I raided my bookshelf and selected Garrison Keillor’s anthology, “Good Poems for Hard Times,” and a couple of other books I thought she might enjoy.

We drove to the hospital and found Maha and Mo and a parking space, and had a wonderful visit, everyone bonding instantly after the first hug. Maha is a writer-editor-translator type just like me, only a couple decades younger. She and Abdalla took a bunch of digital photographs and I prayed inwardly – even though some ghastly crisis in Gaza was already clearly imminent – that all four of us would be back together again one day soon for a reunion. Mo is a great kid: undersized, on account of the illness, but with a smile like a lighthouse and a passionate interest in airplanes. His dream to become an airline pilot someday is not the most realistic dream for a seriously ill Palestinian child from Gaza in 2008, but insofar as our dreams keep us going, maybe it’s very functional. The boys talked soccer and other guy topics and there was a lot of laughter. The chocolates were a big hit.

Abdalla was rather subdued afterwards and I saw that the experience had deeply affected him. We talked mostly of inconsequential things during the drive home.

Around the time of that visit in early December, after a battery of tests, Mo’s bone marrow transplant was declared a guarded success and he was discharged the week before Christmas to make room for the next young patient, despite the iffy situation in Gaza and the near-impossibility of obtaining “permits” to return to the hospital for the required twice-monthly follow-up treatment. There are never enough beds, apparently, for the sick children in this world.

Mo’s prospects soon took a dramatic turn for the worse with the Israeli assault on Gaza launched last week – two days after Christmas, on December 27, 2008. Not even the indomitable Sam Bahour can get a child out of Gaza right now. The date for Mo’s first post-op intravenous treatment at Tel Hashomer – December 30th – came and went. The treatments are – how shall I put it? – not optional. As I write this, cosy at my desk with a fresh cup of coffee and plenty of everything, Mo and Maha are sitting in Gaza in the dark, in the cold, with little fuel and no reliable supply of food and water, along with Mo’s parents and six siblings. Right about now, the family are surely thinking of Mo’s seventh sibling, Nora, who died four years ago of CGD at the age of 16, in a hospital in Egypt, before the doctors were able to diagnose her. Mo has a good chance to manage his illness, if only he can somehow get back to Tel Hashomer. I think of them sitting there, listening to the bombs whistle in flight and waiting for the planned Israeli ground assault, while tanks mass along the Gaza perimeter. In the lethal game of mindless violence and counter-violence playing out in Israel and Palestine lo these many years, Mo and his family are innocent bystanders. His innocence will not get Mo to his IV treatments, however.

Can you feel that wind blowing right through your heart? 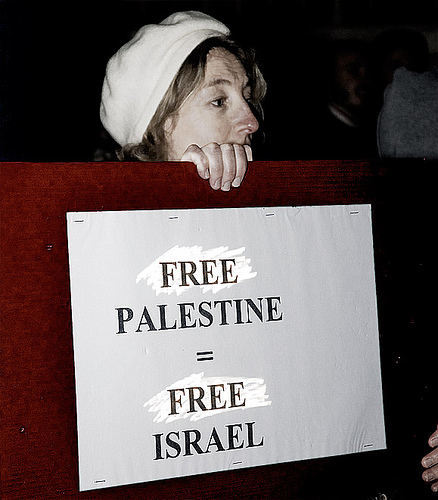 While Abdalla and Mo were talking sports at the hostel that day in early December, Maha and I were chatting about the things women talk about. She told me about her shopping, at the minimarket on the hospital grounds, in preparation for their expected return to Gaza. “My sister-in-law told me to buy us a lot of candles,” she remarked, “because, you know, there’s no electricity most of the time now.” We contemplated this bleak picture together in silence for a few moments.

“So I asked the clerk at the shop to sell me some candles that will last a long time,” Maha continued. “And he showed me these fat, tall ones that are encased in a solid glass container…” I could feel the hair lifting on the back of my neck. “He said they would burn for a week, so I bought a whole bunch of them,” concluded Maha, oblivious, as I sat there, dumbstruck. She was describing the traditional Jewish shiv’a candle – the candle of bereavement lit by Jewish families all over the world for the seven days of mourning on the death of a loved one.

As this ghastly December drew to its grim close, Maha still had enough fuel left to run a small generator for an hour every day or two, so she could get online and do some emails or charge her mobile phone. I got an email saying they are OK (“bombs falling nearby but not on us, so far”) and I sent my love and prayers for the family. As of New Year’s Eve, I knew they were still alive because I got an e-card from Maha yesterday. Her message said: Dear Deb, I wish you and your children a Happy New Year and a long, happy, healthy and successful life. May every day of the New Year glow with good cheer and happiness for you and your family… Love and best wishes, Maha.

Deb Reich is a writer and translator in Israel/Palestine, at debmail@alum.barnard.edu