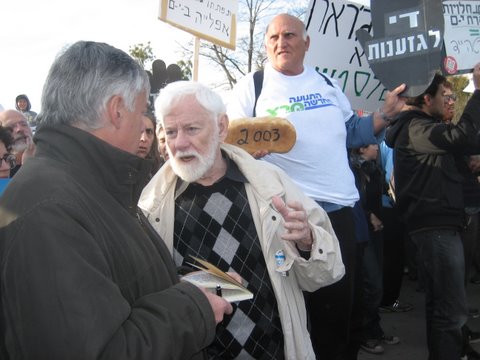 A disaster was averted yesterday (June 5) at Tel-Aviv’s Museum Square, when rightists threw a smoke grenade into the middle of the protest rally, obviously hoping for a panic to break out and cause the protesters to trample on each other. But the demonstrators remained calm, nobody started to run and just a small space in the middle of the crowd remained empty. The speaker did not stop talking even when the cloud of smoke reached the stage. The audience included many children.

Half an hour later, a dozen rightist thugs attacked Gush Shalom’s 86 year old Uri Avnery, when he was on his way from the rally in the company of his wife, Rachel, Adam Keller and his wife Beate Siversmidt. Avnery had just entered a taxi, when a dozen rightist thugs attacked him and tried to drag him out of the car. At the critical moment, the police arrived and made it possible for the car to leave. Gush spokesman Adam Keller said: “These cowards did not dare to attack us when we were many, but they were heroes when they caught Avnery alone.”

The incident took place when the more than 10 thousand demonstrators were dispersing, after marching through the streets of Tel Aviv in protest against the attack on the Gaza-bound aid flotilla.

Not only was this one of the largest peace demonstrations for a long time, but also the first time that all parts of the Israeli peace camp – from Gush Shalom and Hadash to Peace Now and Meretz – did unite for common action

The main slogan was “The Government Is Drowning All of Us” and “We must Row towards Peace!” – alluding to the attack on the flotilla. The protesters called in unison “Jews and Arabs Refuse to be Enemies!”

The demonstrators assembled at Rabin Square and marched to Museum Square, where the protest rally was held. Originally, this was planned as a demonstration against the occupation on its 43th anniversary, and for peace based on “Two States for Two Peoples” and “Jerusalem – Capital of the Two States”, but recent events turned it mainly into a protest against the attack on the flotilla.

One of the new sights was the great number of national flags, which were flown alongside the red flags of Hadash, the green flags of Meretz and the two-flag emblems of Gush Shalom. Many peace activists have decided that the national flag should no longer be left to the rightists.

“The violence of the rightists is a direct result of the brainwashing, which has been going on throughout the last week,” Avnery commented. “A huge propaganda machine has incited the public in order to cover up the terrible mistakes made by our political and military leadership, mistakes which are becoming worse from day to day.”