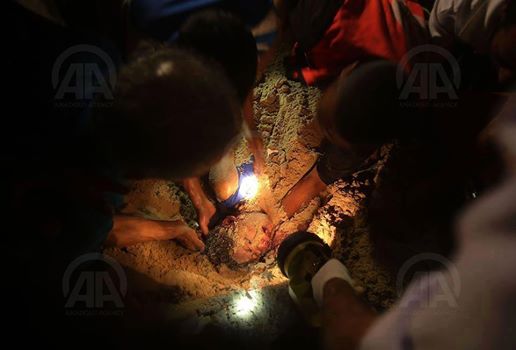 After a long night of heavy bombardment, Gaza woke up to more news of death and destruction. Life is almost paralyzed and streets are near empty. Only emergency teams move in the streets trying to rescue the victims while people are in their homes waiting in anticipation. All is heard is the sound of Israeli war planes and continued bombardment mixed with sirens of ambulances, and in the skies, long, heavy columns of smoke continue to rise.

For the second day in a row, Israel is bombing Gaza with heavy artillery. So far, more than 30 people, including children, were killed and 230 injured (as of 13:00). Israeli attacks target innocent civilians, killing in one incident an entire family of seven in the city of Khan Younes.

The ministry of health declared a state of emergency in all its hospitals and facilities on Tuesday, July 8th. Prior to that, on Friday July 4th, and in anticipation of this situation, PMRS had declared emergency in its facilities.

Sustained damage: Earlier on Wednesday, PMRS health center at Ezbat Beit Hanoun suffered damage due to heavy bombardment in its vicinity and all windows were broken.

Dear friends, you can help us tell the world of the real suffering Palestinians are going through in light of the continued attacks from the Israeli occupation which left Palestinians with one and only choice of trying to defend themselves.

We hope that you would intensify your solidarity activities in your countries through protests in front of Israeli embassies in order to pressure Israel to stop these attacks. We also call upon the international community to take up its responsibility towards the innocent Palestinian civilians and to provide them with necessary protection.