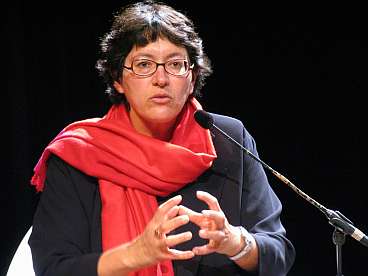 Missing my friends in Gaza
After seven weeks of hell, my heart goes out to the children an hour’s drive away whom Israel does not let me watch grow up.
By Amira Hass, Haaretz, Sep. 1, 2014

The nightmare is in abeyance. No more waking up with a heaviness amid Ramallah’s morning sounds — the sesame-bagel seller hawking his wares, policemen in the distance finishing their training by singing the national anthem, the engine of a cement-mixer owned by the Tarifi Ready Mix Concrete Company groaning outside the window.

No more waking up in fear that overnight some of my friends or their relatives and acquaintances were hurt in Gaza. No more discovering that someone’s home was bombed or damaged, or that the people had to leave in a rush after a phone call from the Israel Defense Forces informing them that the neighboring building was about to be blown up.

No more feverish searching on news websites for the names of neighborhoods that had just been bombed — to know whether I should dread now, for a couple of hours, that the worst has happened to my loved ones. And all this occurs in a time and place where the unimaginably horrific happens to everyone all the time.

No need to wait impatiently for the suitable late morning to start my daily round of phone calls — a kind of macabre inventory: who’s alive, how many whole families have been bombed in their homes overnight.

Fear permeates the courteous sentences that Gazans say despite the bombings: “So how are you? How is your health? Inshallah, God willing, all is well with you.” These voices reveal apathy.

Now I can write about the heaviness, the burden, that accompanied me for seven weeks, day after day, moment after moment, without falling into the trap of narcissism.

My heart may go out once more to the children, an hour’s drive away, whom Israel does not allow me to watch grow up. My heart goes out to them without fear gnawing at every thought.

My heart goes out to Tayyeb, who “ran away” (it was his mother Fatima who chose that verb, with typical self-irony) to his grandmother’s house in the Al-Shati refugee camp when the bombings resumed. There were many children there his age to play with so he could take his mind off the floors and walls, which shook wildly with every exploding bomb.

My heart goes out to Sireen, who plays the oud and can now take her instrument outside into the street. During the war, she was advised not to take it outside because the Jewish state’s drones might mistake it for a Qassam rocket or something and fire a deadly missile at it — and her.

My heart goes out to Yousef, who never answered the phone, and to Yara, so full of mischief, who always answered: “Everything is as usual. How about you?”

It goes out to Carmel, who of all her sisters allowed her fear to show, and who always clung to her father wherever he went in the apartment, its windows shattered.

It goes out to Amal Samouni, whom I was afraid to call so as not to hear how she was reliving the terror of 2009. (Israeli troops killed her father in their home, right in front of her. Later, on soldiers’ orders, she moved to an adjacent building with 100 of her relatives. A drone hit that building with missiles on the order of Givati Brigade commander Ilan Malka, killing 21 children, elderly people, women, men and teens. Amal was seriously wounded.)

Loved ones over there

The nightmare is in abeyance, and my yearning feels almost normal again — not like the cement-mixer in the belly and the head, which crushes every familiar word in the dictionary. It’s yearning in the sense of affection, love, esteem, closeness — everything I learned and am learning from the objects of my longing.

I miss Bassam’s mane of salt-and-pepper hair — Bassam, who taught me how to drive against the traffic. (“If the world is upside down, why not drive the wrong way?”)

I miss the scoldings his mother served with lunch. (“What’s this — have you Jews lost your minds?” She and her husband, both about 75, have heart trouble and difficulty walking. They went on a pilgrimage to Mecca at the start of the war and insisted on returning to the refugee camp when the bombings were going on full force.)

I miss Fawrat, with her dimples, who describes the fear in a practical tone, as if it were the dough she taught me to knead ages and ages ago. That was when house demolitions by bulldozer, not bombing, were part of our vocabulary.

I miss Abu Wissam, a redhead among many other redheads in Beit Lahia, and his jokes about their Crusader ancestors.

I miss Gazan-style humor (“We demand immediate resumption of the World Cup broadcasts”; “We’re celebrating victory — what did you think?”; “Another victory like this and there won’t be any more Gaza”; “[Kibbutz] Bror Hayil is rooting for the Brazilian team? We’re rooting for Argentina” — the words of refugees from the village of Bureir, on whose land the kibbutz, with its many immigrants from Brazil, is situated.)

I miss Kauthar, whose every sentence is razor-sharp and every description so clear it’s as if her audience were experiencing the story she’s telling.

I miss Nihad, the logical one, whose explanations of sermons or verses from the Koran are so clear that even a sworn atheist understands them. And I miss Subhiyah, whose quiet way of explaining things does not conceal her warmth. Flattery and fakery disgust her, and she never stops protesting injustice.

I miss Fakher, always teaching, even when he’s merely saying he just made coffee.

I miss Abd el-Hakim, who did not answer the telephone the entire seven weeks and to whom I owe my first lessons (from 1991) on the economy of the occupation.

I miss Iyad, whose cynicism is the most endearing I have ever encountered.

I miss Majdi, the cunning Majdi, like all Majdalawis — those from Majdal, or Ashkelon — who are known for their craftiness even if they were born in refugee camps.

And I miss Mustafa, who back in 1993 told me as we were leaving the Civil Administration building in Rafah, with its Israeli officers strutting among the natives as if they owned the world: “Don’t believe that you’re really seeing us. We’re just a picture.”

His sentence is so precise in its inaccuracy. After all, each of you is a world unto him- or herself. Your humanity continues to guide me.