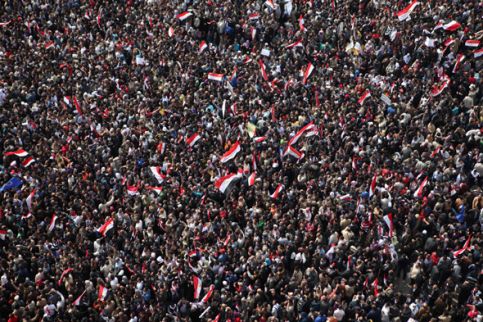 “Yesterday evening, after it was announced that Hosni Mubarak had met the first demand of the revolution and left office, I headed toward the Egyptian embassy in Amman. The joy on the streets was something I had never experienced before.”

Yesterday evening, after it was announced that Hosni Mubarak had met the first demand of the revolution and left office, I headed toward the Egyptian embassy in Amman. The joy on the streets was something I had never experienced before.

From all directions people came, pouring out of cars stuck in gridlocked traffic on Zahran Street and into the side street where the embassy sits. They were young and old and families with children. Egyptian laborers — the unacknowledged back bone of much of the Jordanian economy — sang, carried each other on their shoulders and played drums. Egyptian flags waved and signs were held high.

The chants were as varied and lively as the crowd which grew to thousands: “Long Live Egypt!,” “The people overthrew the regime!,” “Who’s next?,” “Tomorrow Abbas!” Some people showered the crowd with sweets, as fireworks burst overhead. Everyone took pictures, recording a moment of victory they felt was made by the Egyptian people on behalf of all of us.

After Tunisia, a second great pillar of oppression has been knocked down, at such great cost to hundreds who gave their lives, and many millions who saw their lives destroyed for so many years. It was a night for joy, and the celebrations continue today.

After the celebrations are over, the revolution too must go on, because it will not be complete until the Egyptian people rebuild their country as they wish it to be.

But standing in the streets of Amman there was no mistaking that the Egyptian revolution will have a profound impact on the whole region. Arab people everywhere now imagine themselves as Tunisians or Egyptians. And every Arab ruler imagines himself as Ben Ali or Mubarak.

The revolution has reawakened a sense of a common destiny for the Arab world many thought had been lost, that seemed naive when our mothers and fathers told us about it from their youth, and that Arab leaders had certainly tried to kill. The Arab dictators, who are as dead inside as Mubarak showed himself to be in his awful televised speeches, thought their peoples’ spirits were dead too. The revolutions have restored a sense of limitless possibility and a desire that change should spread from country to country.

Whatever happens next, the Egyptian revolution will also have a profound effect on the regional balance of power. Undoubtedly the United States, Israel and their allies are already weaker as a result. First they lost Tunisia, and then suffered a severe setback with the collapse of the US-backed Lebanese government of Rafiq Hariri, and now Mubarak and Omar Suleiman, the closest and most enthusiastic collaborators with Israel except perhaps for Mahmoud Abbas and his cronies in Ramallah.

On many minds — especially Israeli and American ones — has been the question of whether a new democratic Egyptian government will tear up the 1979 peace treaty with Israel. That of course, is up to the Egyptian people, although the transitional military government confirmed in its fourth statement Egypt’s adherence to “all international and regional treaties.”

There is no doubt that the United States will not give up its hegemony in Egypt easily, and will do all it can to frustrate any Egyptian move toward an independent regional policy, using as leverage its deep ties and enormous aid to the Egyptian military that now rules the country. The regional ambitions of the United States remain the main external threat to the success of Egypt’s revolution.

Whatever break or continuity there is with Egypt’s past policies, the calculations have changed for remaining members of the so-called “alliance of moderates,” particularly Saudi Arabia — which allegedly offered to prop Mubarak up financially if the US withdrew its aid — Jordan and the Palestinian Authority.

For many years, these regimes, like Egypt, bet their security and survival on a virtually unconditional alliance with the United States: they abandoned all dignified, independent and principled positions and adopted America’s hegemonic aspirations as their own, in exchange for assistance, and what they hoped was a guarantee that the US would come to their rescue if they got in trouble.

What the revolutions demonstrate to all Arab regimes is that the United States cannot rescue you in the end. No amount of “security assistance” (training, tear gas, weapons), financial aid, or intelligence cooperation from the United States or France can withstand a population that has decided it has had enough. These regimes’ room for maneuver has shrunk even if the sorts of uprisings seen in Egypt and Tunisia are not imminent elsewhere.

After the revolutions, people’s expectations have been raised and their tolerance for the old ways diminished. Whether things go on as they have for a few weeks, a few months, or even a few more years in this or that country, the pressures and demands for change will be irresistible. The remaining Arab regimes must now ask not if change will happen but how.

Will regimes that relied for so long on repression, fear and the docility of their people wait for revolution, or will they give up unearned power and undertake real democratization willingly, speedily and honestly? This will require not just a dramatic change of internal policies which regimes may or may not be capable of making voluntarily, but also a deep reexamination of external alliances and commitments that have primarily served Israel, the United States and the regimes at the expense of their people.

Jordan is now a prime case where such a reexamination is urgently due. Regardless of whether or not (and I think almost certainly not) the newly-appointed cabinet will be able to meet public expectations for democratization, fighting corruption, and ending the worst neo-liberal policies that have put so many of the country’s resources and companies in unaccountable private hands, the country’s foreign policy must undergo a full review.

This includes the overly dependent relationship on the United States, relations with Israel, participation in the sham “peace process,” the training of the security forces used by Mahmoud Abbas in the West Bank against other Palestinians, and the deeply unpopular involvement in the NATO war and occupation in Afghanistan. Up until now, these matters have all been decided without any regard to public opinion.

And in the West Bank, the Palestinian Authority (PA) of Mahmoud Abbas is in a more precarious situation than ever. Its loss of legitimacy is so thorough — especially after the revelations in the Palestine Papers — that it exists only thanks to the protection of the Israeli occupation, US and EU training of its repressive security forces, and massive EU funding to pay the salaries of its bloated bureaucracy.

The PA’s leaders are as dead to the just cause and aspirations for liberation of the Palestinian people for which so much has been sacrificed, as Mubarak was to the Egyptian people’s rights and hopes. No wonder the PA relies more and more on the thuggery and police state tactics so reminiscent of Mubarak and Ben Ali.

The revolutions in the Arab have lifted our horizons. More people can now see that the liberation of Palestine from Zionist colonialism and US- and EU-funded oppression, to make it a safe, humane place for all who live in it to exist in equality, is not just a utopian slogan but is in our hands if we struggle for it and stick to our principles. Like the people power, against which the Egyptian and Tunisian police states were powerless in the end, Palestinians and their allies (particularly those supporting the boycott, divestment and sanctions movement) have the power to transform reality within the next few years.

In whatever form the revolution continues, the people are saying to their rulers: our countries, our futures, don’t belong to you any more. They belong to us.

Ali Abunimah is co-founder of The Electronic Intifada, author of One Country: A Bold Proposal to End the Israeli-Palestinian Impasse and is a contributor to The Goldstone Report: The Legacy of the Landmark Investigation of the Gaza Conflict (Nation Books).