AA: In recent weeks we’ve seen a number of protests take place of Palestinian refugees marching to the Israeli-controlled frontiers of Palestine and people being shot at by Israel. The Israelis have said that they are making preparations to stop the flotilla. There have been intense diplomatic efforts to try to persuade those organizing the flotilla not to go. What do you think needs to happen? How can we raise awareness in a way that we can mobilize that kind of support for this flotilla and its goal of lifting the blockade?

AW: I think that we are dealing with people of high irrationality, to put it really kindly. So there is no way of really assuming that anything that we can do will stop them from doing what they have done for sixty years.

The facts are that we are dealing with some very brutal people; people indoctrinated over a long period of time. And a military that obviously is insensitive to the sufferings of other people. That’s the reality. So it would be great if with The Electronic Intifada, you do what you can do, you know, and if other media outlets run by people of conscience raised the hue and cry.

But at the end of the day I think all of us who are committed to being on the boat have the task of soul-searching that Martin Luther King Jr. went through during his time in jail in Alabama, when he wrote his Letter From a Birmingham Jail.

There was no way that he could know what would happen because customarily he would have been taken out of there in the middle of the night and beaten to death or lynched or hung from a tree. He had to, in his own soul, acknowledge this very real possibility.

AA: This will not be your first time trying to go to Palestine or going to Palestine. You were previously in Gaza and you wrote an incredibly beautiful short book about it, Overcoming Speechlessness — we had the opportunity to publish part of it on The Electronic Intifada before it was a book. And you recently were in the West Bank. What was your experience in the West Bank?

AW: Well, the wall. The wall. When I was looking at a snippet of the Senators and Congress — people applauding [Israeli Prime Minister Benjamin] Netanyahu I just had to wonder if they had ever stood in the shadow of that wall.

That wall is such an insult to the soul of humanity. It’s so enormous. It’s so threatening. And they are building it right in the faces of people and stealing their land in the process; so not only are they walling in the people but they are taking their land and then shooting at them when they try to work their land so they can have something to eat.

This is such a crime against the soul of humanity. We can’t stand this. Who are we as human beings if we can even bear this? We cannot bear it. And we must not. So that was one of the amazing impressions, just the enormity of the wall, how much of it there is.

And then the other thing was the settlements. The settlements are huge. They are unlike anything I had expected. And they are everywhere, everywhere! And so I realized that this whole long drama, the charade called the peace process, was simply a diversion, a shadow play, so that people wouldn’t realize that there was never going to be any peace.

It was always about taking the land. Religion had nothing to do with it; or it was used as an excuse. On some level I knew that, but seeing it made it really clear to me that “Aha! This is what this has been about from the very beginning.”
…

When we were driving along in the West Bank we were shown all of these fields where the Israelis had cut down the olive trees. There were acres and acres of black stumps. I had to weep because trees are innocent and all they do is stand there and they give us whatever they have — we reap the benefit of their existence and that anyone would cut down even one without being sorry is painful. 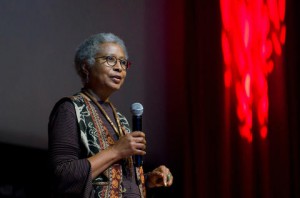 AA: Listening to you, it strikes me that so many of the things that are said about those working for justice in Palestine by the Israeli state, by some of its supporters in this country, are so defamatory and so cruel and so misguided. And so lacking in empathy. Does that get to you? Does it worry you that you may be called all sorts of things for undertaking this journey, wherever it leads?