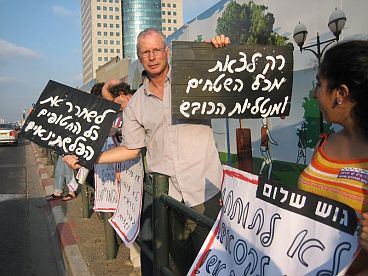 Less than 24 hours after the start of the invasion of the Gaza strip, the first demonstration against it took place. It was called by Gush Shalom. In spite of the fact that there was no prior publicity at all, about a hundred peace activists came to the Ministry of Defense in Tel-Aviv and voiced a clear and unequivocal protest.

Posters prepared on the spot declared: “The invasion endangers the life of the captured soldier Gilad Shalit!” – “Let’s not have another Nakhshon Waksman!” (Waksman, a soldier, was captured by Hamas in 1994. He was killed when the army tried to free him by force) – “A cease-fire now for the sake of the children of Gaza and Sderot!”

As could be expected, some passing drivers cursed the demonstrators, but it is remarkable that not few drivers supported them by shouting and hooting.

Gush spokesman Adam Keller, summing up: “It was important to demonstrate at once, in order to make it clear that there is opposition to this action and to raise a voice against the propaganda that is flooding all the media!”