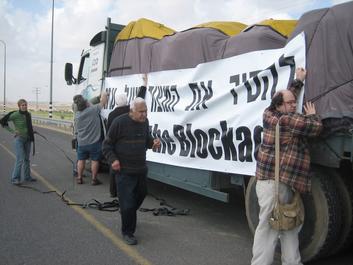 From: Palestinian International Campaign to End the Siege on Gaza

Yesterday, we have managed to get the humanitarian aid and supplies into Gaza, thanks to all genuine and determined efforts made by our Israeli friends, and by Mr. John Ging of UNRWA. We have cooperated with local national NGOs to ensure that such supplies find its way to those who need it.

This important triumph is an indicator and a clear message to both our nations as well as the whole world, that we, Israelis and Palestinians, are still able not only to work together, but also to make achievements, and that all voices which claim that there are no more partners-in-peace among both sides are simply wrong. Both our nations still have genuine, sincere, and determined peace activists and advocates, and still have plenty of courageous men and women like you, who are ready to take the peace and justice struggle to end this ugly military occupation.

It was of our pride to be the body which delivered your peace and support message to our people in Gaza, and we are ready to continue working and cooperating with all of you to recover both our nations’ faith in peace. The last couple of years were so difficult for peace camps on both sides, but we recognize January’s march to Erez as a turning point and a new start which we all must embrace to rebuild trust in peace and in peace camps.

On behalf of our people we thank you again for your commitment and support, and for thinking of us at such difficult times, and for dedicating time and efforts to raise your voices against injustice and in favor of peace.

Dr. Eyad Sarraj
For the Palestinian International Campaign to End the Siege on Gaza