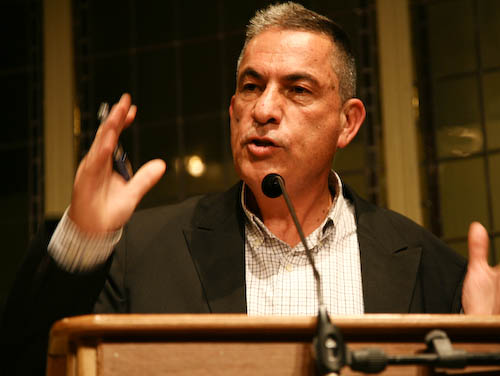 Good morning, Europe. The sleeping beauty, the enlightened white continent, is “rebuking” Israel for its intention to build in the forbidden E-1 region. The ambassadors are duly rebuked, and the rebukers feel satisfied: They’ve made a contribution to peace. It’s classic Europe in the best tradition: a dance of hypocrisy and sanctimoniousness. Why, what happened, Europe? Now you’re showing up? Now you’re rebuking? Where were you before?

Europe is rebuking Israel because this time, America permits it. Before, America forbade it; hence the self-restraint. While public opinion in Europe has been raging against the occupation for years, European governments have continued to be its greatest collaborators: They finance the virtual Palestinian Authority and give Israel carte blanche to rampage and settle to its heart’s content. It’s the shadow of the past, you understand.

Just two or three weeks ago, Europe was still supporting yet another unnecessary Israeli military operation in Gaza, just as it threw off all constraints in supporting Operation Cast Lead in Gaza, complete with all its war crimes, four years earlier. Now, all this has seemingly ended. But only seemingly. Another day or two and the “rebukes ” will be forgotten, and Europe will once against support Israel’s next violent caprice. Israel, which in any case never paid any heed to Europe, can stop worrying. Nothing happened. And it could be nothing ever will happen.

As with the “illegal outposts,” which are neither morally nor legally different than the “legal settlement blocs,” here, too, Europe (and the United States ) has invented a bogeyman for itself in the form of a ridiculous red line: E-1. If Israel dares to build there, that will spell the end of the two-state solution. Some 500,000 settlers are fine; it’s just this minor detail, E-1, that disturbs Europe’s peace.

Back in the summer of 2005, when Aluf Benn reported in Haaretz about Israel’s intention to build a police station in E-1, the world also raised an outcry, and America (with Europe following right behind ) “expressed concern.” So great was this concern that it gave birth to the magnificent building housing the headquarters of the Judea and Samaria District Police in the heart of E-1. Then, too, everyone knew that this was merely the appetizer, in whose wake 3,000 homes would arise, and nevertheless, they restrained themselves. Just as they did with the settlement of Har Homa in its day, which was also intended to slice and dice: The world felt “concern” – and Israel built. All the rest is irreversible history and geography.

Let’s say that this time, Israel does pay heed to the world’s rebuke and postpone its plan to build in E-1. What will happen then? Peace? Justice? An end to the occupation? Two states? This ability to set a marginal, ridiculous goal and do battle over it, but only over it, while ignoring everything else is no more than a grotesque costume party to ease the troubled European conscience.

After 45 years of brutal occupation, Europe has remembered to rebuke Israel. And even this rebuke is no more than a dance step: The British foreign minister has already hastened to promise that economic sanctions aren’t on the agenda; even recalling the ambassador was merely “considered.” But why, really? Is the occupation not harsh enough? Is the violation of international law not blatant enough? Is the European interest in resolving the Palestinian problem, which helps nourish global terror, not clear enough? Has European public opinion not made itself clear?

But all this is dwarfed in Europe by two excuses: the past and America. Both haunt the continent. Yet both are dubious excuses: Precisely because of the past, Europe should now mobilize to save Israel from itself and its occupations. And precisely because the United States, with its blind support for Israel, is playing such a destructive role in resolving the conflict, Europe is obligated to provide an independent voice.

It’s not clear why, in the reality of the 21st century, Europe continues to be a pale, subjugated shadow of the United States in the Middle East. And it’s impossible to explain what connection there is between the horrors of the past and support for the occupation. Good morning, Europe, you’re late once again: too little and too late.